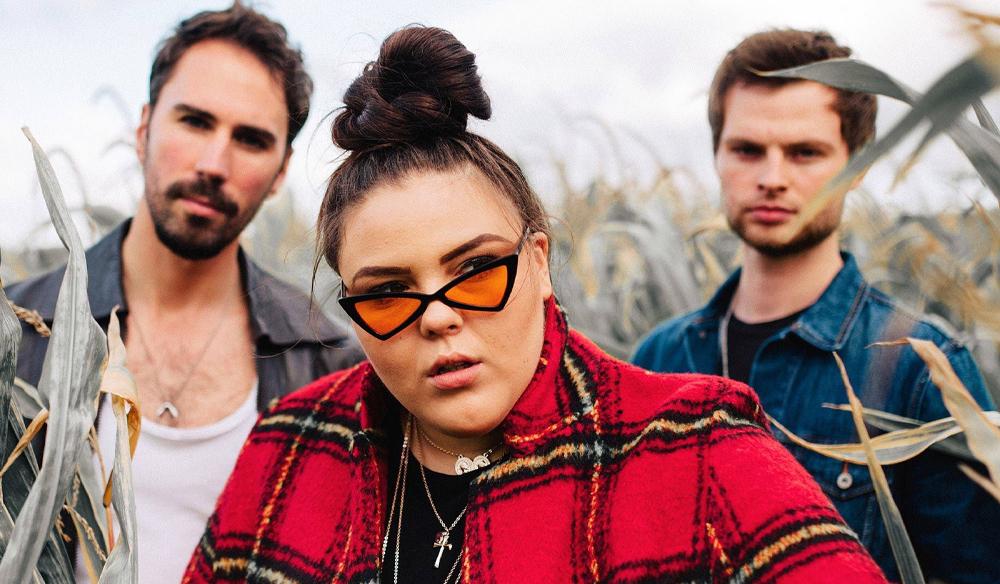 “We woke up with a sore head, but it still felt right.”

Most brainwaves born in bars are exposed as frauds in the cold light of day.

But when the name ‘Bang Bang Romeo’ emerged through a haze of tequila as a potential moniker for Anastasia Walker and her bandmates, it felt like a winner.

The name survived the morning hangover, and soon it would be slapped on arenas like Hampton Park, Anfield and Wembley Stadium.

Today, Bang Bang Romeo are blasting their coined brand of powerhouse pop-rock to more listeners than ever – showering sold-out crowds with a deafening confetti cannon of uplifting, important messages about embracing identity. But none of this happened overnight. And it certainly wasn’t an accident.

During the beginning, there was a lot of hard work and late nights as Anastasia recycled her material through the local pub circuit in Yorkshire.

“I started gigging when I was about 13/14, singing at almost any bar that would allow me indoors,” the frontwoman tells us.

“Growing up, I mainly did bar work – it’s the only job that allows you to be a musician. I was sacked from the mall for having so much time off. The pub was a place where I could sing for tips!”

After Anastasia met guitarist Ross and drummer Richard, the trio began to walk the path to that tequila bar where Bang Bang Romeo was conceived.

“That was that. There was never another option for me but singing.”

As momentum behind the band increased, things abruptly shifted into fifth gear when they were picked out by superstar Pink to support her at Wembley.

Looking back on the series of shows that changed their lives, Anastasia is still giddy.

“Ooh, ‘ey, that were good!” she laughs, her thick Donny accent rising to the fore.

“Pink’s agent turned up at a showcase we were doing in London, and later we got a phone call saying she’d thrown our hat into the ring to support her.”

“We thought ‘that’s hilarious’, but she picked us, and it was the best experience of our lives.”

“We’ll never be able to thank Pink and her team enough for that.”

Perhaps Pink saw a little of herself in Anastasia – a woman with a strong stage presence, a message to match the decibels, and a striking personality.

“(I want to) totally carve my own path,” says Anastasia.

“I’m a gay woman and growing up in Doncaster there wasn’t really anyone to look up to in that sort of way.”

“Powerful people are inspiring to me. But in terms of following someone’s footsteps… I’m not really that sort of chick. I’m just my own person.”

“Singing in front of people… it sounds weird but it’s quite relaxing for me. I love the butterflies. I’m a total adrenaline junkie. The second I come off stage I’m dying to get back on it again.”

Anastasia’s buzz for the soapbox is reminiscent of a movie star – and it’s true that film has played a key role in moulding Bang Bang Romeo’s music.

A strong soundtrack influence seeps through their debut LP, ‘A Heartbreaker’s Guide To The Galaxy’, evoking compositions found in Tarantino, Burton and Bond flicks.

“The album is a rollercoaster of emotions and a journey to a different planet altogether,” the singer explains.

“It was recorded all over the place – we were moving around when we wrote it and wanted it to transport listeners to somewhere else.”

“We’re doing more writing now and the new album will be the next chapter of who we are.”

“There’s lots of stuff about female empowerment in there. I’d like to say this one’s for the girls – definitely one to scream and dance to in the room with your best friend, I think.”
Bang Bang Romeo are a big unprickable balloon of positivity with something to say. But they’re not all talk. When their fans need them, they’re there.

The group’s hometown of Doncaster succumbed to torrential flooding last year, and they rushed to arrange a benefit gig.

“It was devastating to see (the floods),” Anastasia sighs.

“It’s not our style to sit back and not do anything, so we asked ourselves: What could we do? To make a proper difference we knew we needed to make a shit-tonne of money.”

“Within four days we planned a benefit concert. We got BBC Look North there, Doncaster FC and rugby club came down, and Example and Kasabian gave us tickets which we raffled off. We managed to raise around 8k … and I think it was free entry as well!”

“That’s what we’re all about up here. We come together in’t north don’t we?!”

That’s for sure – and Manchester will welcome Bang Bang Romeo to the city with open arms when they arrive for their gig in April.

“I LOVE Manchester,” Anastasia tells us emphatically. “We always wanted to sell out Deaf Institute and last year we did it!”

“We’ve gigged in Manchester quite a bit and it was one of the loudest places on the last tour.”

But the stop off at Gorilla is only one item on an increasingly noisy agenda for Bang Bang Romeo, who have a mega 2020 lined up.
“I’d like some sleep… but there are no plans to slow down!” Anastasia chuckles.

“We’ll be playing massive festivals and hitting new territories, so people can expect twice as much of everything! The new tour is the first time we’re playing the album in full, with tracks we’ve never played live before.”

You may also like...
TagsBang Bang Romeo, Exclusive, Interview