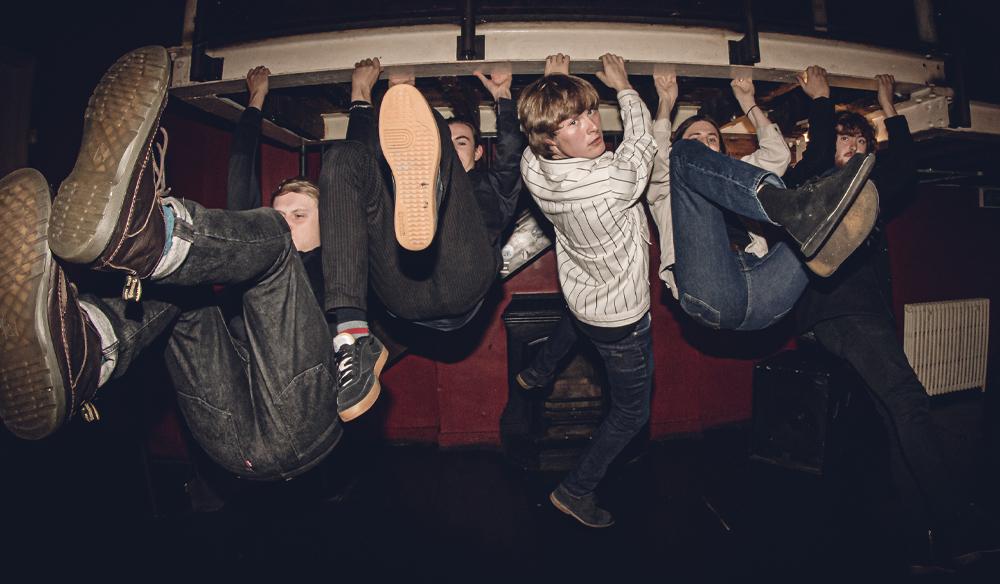 Dirty Laces on their career so far and plans for 2020

Dozens of singers, guitarists, drummers and bassists are milling around Band On The Wall tonight – all waiting for their upcoming slots at Off The Record.

Among them is Dirty Laces bassist, Tom Edwards – who’s throwing out the odd “alright, mate” to familiar punters and performers drifting past him through the hallways.

“This is my first gig here,” he tells us in somnolent Mancunian twang as he eyes a quiet spot away from the hubbub of the main room.

“I’ve been here watching my mate’s band before; but I’ve never played.”

This iconic building on Swan Street is one of the last local live venues to tick off for Tom and his bandmates – with Dirty Laces almost completing a full circuit of Manchester’s sprawling gig scene just two years after forming.

“Shows like this involve a lot of warmup stretches – but we’re getting used to it, now,” Tom explains. “We’re confident in what we’re doing and it gets easier with every gig. There are nerves – but there’s adrenaline as well.“

“We gig so much now. We’ll play anywhere – and we’re loving it.”

Early praise for Dirty Laces has been as deafening as their roaring sets – with rock legend Pete Doherty among the ever-growing list of supporters.

The group’s progress is particularly remarkable when you consider they’re all still balancing their gig duties with day jobs. Tom, for example, is using his freshly unfurled politics degree from MMU in a civil service role – where you’ll find him 9-5, Monday to Friday.

“Gigging, rehearsing twice a week and holding down a full-time job does have its difficulties,” Tom chuckles. “But this is what we love. The passion for the music keeps us going.”

It’s exactly this kind of attitude that’s getting the city – and The Libertines frontman – quite so excited about Dirty Laces. They go for broke, every time they play.

“We’re into our music and we actually believe in what we’re playing. We put a lot of passion into our performances. You can clearly tell when bands aren’t really into their own stuff – but we are. We enjoy what we do, and I think that comes across.”

“We focus a lot on lyrical content, too. We want our music to have a meaning. I think being subtle with your lyrics is quite important. We don’t want to be shoving stuff down people’s throats – we want to leave it open to interpretation.”

Dirty Laces are a hybrid group in every sense; merging together from separate bands to produce music that dabbles in various subgenres of classic rock.

“We all knew each other from mutual bands and ended up coming together when we were all looking for a new project to work on,” Tom explains.

“A few of us have been in different groups at different times, but we’ve all gelled pretty well. We’re all driven and we’ve got the same mindset.”

The group’s analogous attitudes appear to have been there from day dot, too – with Tom’s proposed band name earning unanimous agreement.

“We all liked it and thought: ‘we’ll have that’. It just stuck and it seems to have gone down pretty well, like.”

Dirty Laces have developed a grungy style befitting of their moniker – packing out venues across the rainy city with growling guitar played at breakneck tempo.

“We’re very much a heavy, guitar-driven, old-style rock and roll band – that’s kinda our thing, man. We have snuck synth into the background recently, too. I kind of feel like we’re starting to develop our own thing now.”

Dirty Laces’ style and sound has invited some comparisons to Oasis – but Tom and his bandmates have actually looked further back than the nineties for rhythmic inspiration. “We’re more into our sixties and seventies stuff – proto-punk and garage rock, bands like Pink Floyd, Stooges and MC5,” Tom clarifies. “We try and put a modern twist on the music we love to create our own sound.”

“We’ve just been demoing in Wales actually, and I think we’re writing the best stuff of our careers. Our music is maturing quite a lot. There’s a lot more depth and thought in there now – both lyrically and instrumentally.”

“We’re finding our sound and strengths while addressing the weak points.”

The days of Madchester and Britpop might be behind us, but Tom firmly believes that Manchester is still one of the best places to be for musicians.

“The Manchester music scene is thriving,” he says adamantly.

“There’s a lot of good bands in the city and a lot of competition – but what’s great is that we’re all helping each other out.”

“There are also some good independent people like Chris Hawkins on BBC Radio 6 playing our music and supporting upcoming bands like us who are doing it in a DIY way.”

“There is support out there, but you do still have to really graft yourselves, dig in and go through the hard times.”

There’s lots more to come from Dirty Laces in 2020, and whilst Tom and co are still deciding exactly which route they want to take – one thing that definitely isn’t going to stop is the music.

“We’ve been lucky to play a few of the iconic venues in Manchester already and we’re hoping to get onto even bigger ones to reach a wider audience,” Tom explains.

“We’ll be recording another EP and looking at a longer album in the future. It’s just about getting the right deal and knowing exactly what we want to do.”

“We’re definitely looking at a proper tour soon, too.”

Catch Dirty Laces’ at The Deaf Institute on Sunday 22nd December, tickets below.