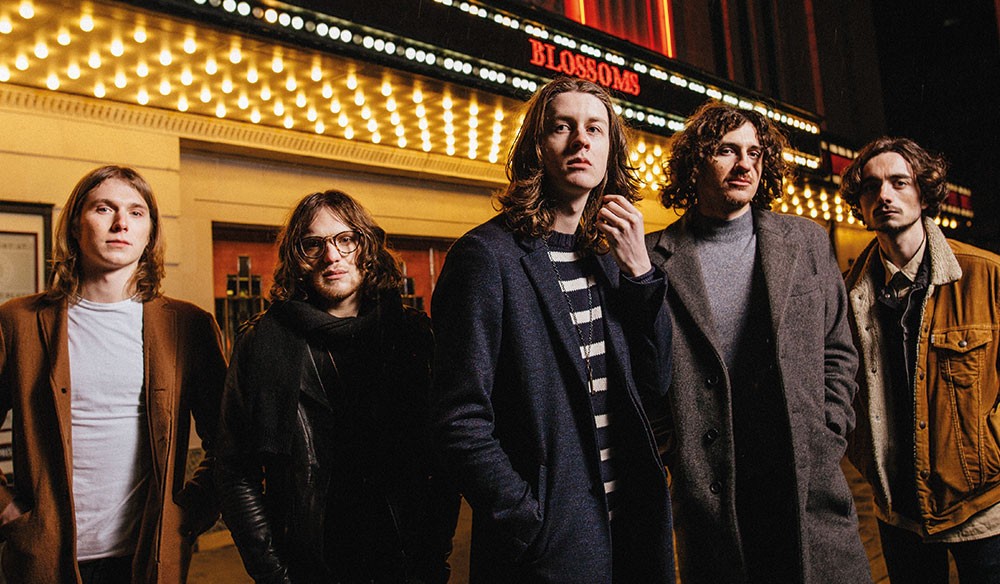 Blossoms are without a doubt Stockport’s biggest export since the hat industry.

Named after The Blossoms pub in their hometown, following their formation in 2013 the indie-rock quintet has gone on to spawn a No. 1 self-titled debut album, which currently sits in 116,000 homes across the UK and contains 8 stellar sing-along singles.

This summer alone the band has headlined a show at Manchester’s Castlefield Bowl, recorded a surprising collaboration with Chase & Status, toured America, and front-man Tom Ogden has only gone and documented the whole thing in a film titled ‘All Night Long’. The group has even squeezed in a spot of vintage shopping while in the US, and have the 70’s collars to prove it! But success hasn’t changed the band, as they remain grounded, hard working and up for a laugh.

As we sit down together, backstage at Leeds Festival, the Main Stage where they are set to perform is but a stone’s throw away. Within the perimeter gates, festival-goers don the band’s distinct psychedelic logo across their chests in preparation for Blossoms’ early evening slot.

Cool, calm and collected the group seem unfazed by it all. Drummer Joe Donovan explains; “I’d say we’ve always had [a great time] – especially in Leeds – it’s always been a highlight crowd of festival season. The crowd are always up for it. Catering’s alright, isn’t it? Chili-con-carne this morning.”

Lead singer and guitarist Tom Ogden nonchalantly adds; “I had a chicken katsu curry – it’s a bit weird when you wake up and have that for breakfast, you know what I mean?

I would have much preferred a bacon sarnie, but being a Northern band, Leeds as a whole is always up for a good time, which is what you want when you’re a band.”

The five-piece have skillfully scaled an arduous ascent from the Festival Republic Stage up to antepenultimate slot on the Main Stage at Reading & Leeds in threeshort years. Baby-faced front-man Tom enthuses; “It’s a good achievement to go and build yourself up from Festival Republic, to NME, to the Main Stage in three years on the bounce. So yeah, we’re dead proud of what we’ve done and I think we’ll be in very good spirits after we play, especially with Liam Gallagher on afterwards ‘cause we’re big Oasis fans. So it couldn’t be a better afterparty if you could call it that.”

Now turning 1 year old (happy albumversary!) the record has been nominated for the Mercury Prize. Bassist, Charlie Salt, ponders; “Do you know what, it’s one of them, I don’t think we’ll even win, we’ve not even thought about it yet. In our heads, we’re not gonna win. Nah.” When asked how they will celebrate if they do win Tom adds;

“(If we win the Mercury Prize) we’ll probably just have a pot of tea.”

debut. When asked if they still use the space for rehearsals the band said; “Unfortunately we’ve outgrown the scaffolding yard because we have so much equipment now.”

“When we’ve been on the road for the last year and a half, we haven’t really been rehearsing as such ‘cause we’ve been playing the album songs and they’re already rehearsed up. So if we ever need to learn something for Live Lounge or something like that, we just go to a proper rehearsal room or something like that. So, unfortunately, the scaffolding yard is defunct.”

“I think that’s why we put it (scaffolding yard) on the debut album front cover ‘cause we knew we wouldn’t be there forever so it was good to document it. That was that part of our lives and we loved them times, you know what I mean?”

Tom jokes; “If the business moves in years to come, we’ll buy it and turn it into a like bigger place, or  a museum!” Joe adds;

“Yeah a Blossoms museum, just loads of Tom’s flares in there!”

The ‘Honey Sweet’ boys leave no time for complacency in their busy schedule, as they have already started work on a second album. Tom explains; “We didn’t overthink it and we never got carried away with success and thought we’d made it. In our heads, we haven’t made it until 2 or 3 albums – a solid body of work. So after the first album I just got my head down and focused on writing songs.”

“We weren’t going out, getting fucked, we kinda knew the job at hand. So while we don’t take ourselves too seriously – we’re up

teenage pals that unites them. “We know obviously the pressures on when you’ve had such a successful first album. Listening to this one (second album) everyone who has heard it up to now has said that they think it’s better than the first one so, we’ll just have to wait and see.”

Blossoms have offered up some new music in 2017 in the form of ‘This Moment’, their collaboration with Chase & Status. The anthem is a real crowd pumper – a “fucking banger” as Tom puts it – and a number of remixes are already floating around the web-a-sphere. Tom explains; “They just got in touch, they were fans of our music and they were making a new album.”

Before our chat came to an end we had to ask about the ‘Home of the Blossoms’ sign in Stockport. The indie-rockers recalled that it had been an advert for a local curry house, and tongue-in-cheek they had suggested to the council that it should be changed.

“Stockport Council just love us, they’ve done loads for us.”

“I think we were driving past one time and saw it was an advert for – was it Shabaz? – a curry house – and it wasn’t even open. So we just sorted it out and thought it was a bit of a laugh and it’s still there.”

“For some reason when you are in a taxi on your way up into town, the taxi driver always brings up ‘what do you do?’ and at that moment you’ll be passing that sign, and we say, ‘we’re in a band and that’s our name up there’, and he’s like ‘Nah, you’re full of shit’.”

Following the interview, the downto-earth band are happy to pose for photos with their fans, donning a comedy hat or two stolen off nearby heads. As emphasised, the Blossoms do not take themselves too seriously but as their later set plays testament to, there is one thing they are serious about – music. Their sonic prowess and relatable lyrics seem to really resonate with the Northern crowd.

As Stockport’s burgeoning hatlegacy is now tributed by a Hat Museum, the idea of a Blossoms’ museum in years to come may not be a far-fetched proposition for the lads after all.

You may also like...
TagsBlossoms, Exclusive, Interview, Leeds Festival, Stockport