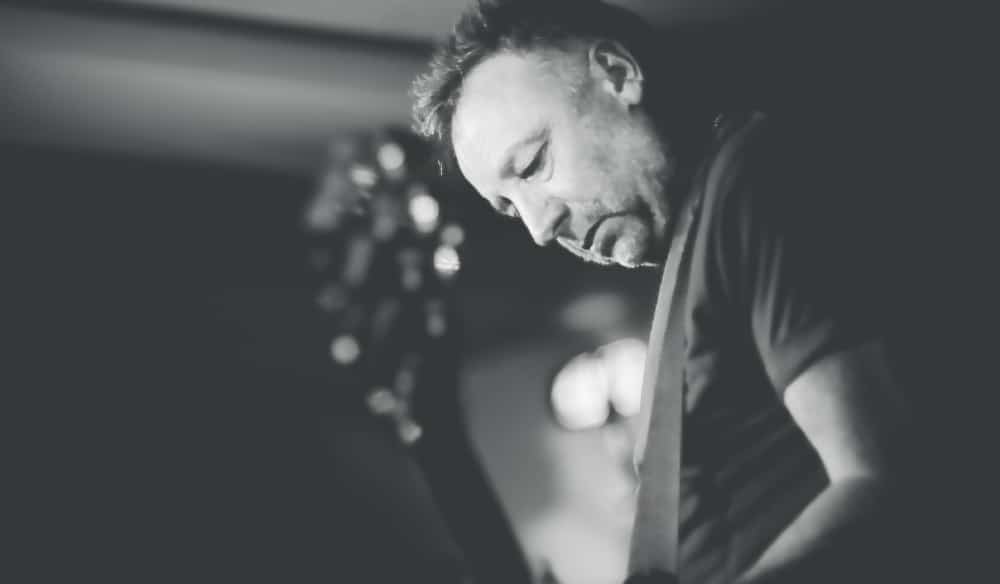 He takes his seat on the train from King’s Cross and orders a bottle of water from the trolley, eagerly reminiscing and surmising in equal measure as we probe about his music career – pausing for breath only when the conductor releases a long garbled message over the loudspeaker.

At “the ripe old age of 63”, as he puts it, Peter’s hedonistic days might be over, but he’s still got the touring energy of a twenty-one-year-old. “The biggest frustration I had when I was in New Order was that they hardly ever played,” he puffs with exasperation.

“It was like being outside Costco and no fucker would give you the keys. Unbelievable. We had all this shit that people were queuing up around the block for and nobody would let you open the door. It was so frustrating.”

‘Hooky’ is certainly playing enough now. His Joy Division and New Order vehicle The Light have racked up more than 500 shows since 2010, and he spent last night performing an orchestral rendition of JD’s ‘Unknown Pleasures’ album.

“It was a challenging show,” he chuckles. “We wanted to make it the same, but different. The only way to do that was to give up a lot of the basslines to the orchestra. It really helped the music… but when it came to standing on stage, I felt very naked. It was like I had nothing to do!”

“It was a very different reaction to what we usually get. Honestly, you could’ve heard a pin drop. I was waiting for someone to shout ‘get on with it ya bastard’. But literally there was silence.”

“Everyone seemed blown away by the new interpretation of it.

‘Unknown Pleasures’, in any format, is widely recognised as being one of the most influential records ever produced; a seminal album unlike anything that came before it. June marked the 40th anniversary of its original release.

“Unknown Pleasures caught a moment at the end of Thatcher’s Britain, but it also the rallied against what most bands fell into around then – which was corporate ownership,” Peter explains, decoding the LP’s significance. “The album was all about being independent. It was protest music. These days you don’t really get that.”

“Ian Curtis, through his words, managed to capture what all of us go through. That’s what made it stand the test of time. The music still sounds great today.”

But these extraordinary results came from conflictingly inelegant surroundings. “The beauty about being on Factory Records was that there were no luxuries,” Peter laughs. “We never had our heads turned in any way. We kept our roots and suffering. In the late seventies, the height of luxury was having a toilet with a seat.”

“We were so young… and we simply didn’t know how good we were. In the end, that was probably a good thing; you just get on with it. We recorded the whole thing at night over two weekends. It was cheaper that way.”

At the forefront of ‘Unknown Pleasures’, and everything Joy Division, was their enigmatic, brooding singer Ian Curtis – whom Peter continues to pay tribute to almost forty years after his death.

“The reason I started playing Joy Division and New Order music again was to celebrate Ian Curtis’ life – the man himself and his legacy. Ian was fantastic. Even at the height of his illness he was so passionate and enthusiastic about the group. He was our champion. If you ever started to falter or wane interest-wise, he was always the one who picked you up, put you back on the straight and narrow and go: ‘Come on – we can do it’.”

“My greatest satisfaction has been taking Joy Division to all the places Ian wanted it to go: Brazil, Chile, Mexico, America, Russia, China, Mongolia, Australia. He always used to talk about us going to these places and now we have done it for him. I’m very proud of that.”

With the birth of The Light came the unenviable task of filling Curtis’ shoes, and we ask Peter if he feels comfortable representing such an iconic presence on stage.

He thinks about it for a second or two. “Now I do,” he tells us. “It took about six months before I could ease into it. I mean, what makes me laugh about it is that this is all we’re getting. Ian’s not coming back. Joy Division’s not coming back. What we’ve got is The Light – who play this music with the right amount of passion and enthusiasm.”

“I’m still the biggest Joy Division and New Order fan there is.”

The Light inhabit the bodies of both bands during many shows, switching seamlessly from one to the other mid-set.

“There’s definitely a difference moving from Joy Division to New Order, but what’s strangest for me is this divide among the fans,” Peter muses. “You really don’t seem to get many people who love both bands. They either love New Order and they’re ok with Joy Division or vice versa.”

“When we play we can always tell who’s who because the Joy Division fans are wearing the ‘Unknown Pleasures’ t-shirts. When we look at the audience and see those shirts we’re like:
“Oh shit, New Order’s gonna bomb!”

Both sets of fans will undoubtedly have their eyes set on Cotton Clouds – the upcoming festival taking place just a few miles east of Manchester in Saddleworth on 16-17 August.

“I’m really looking forward to that one,” Peter enthuses. “There’s an aura around this festival – people are being really drawn in by it.”

“I don’t think I’ve ever had more requests for guestlist than I have for Cotton Clouds. It could be the romantic name of it… or maybe I’m just surrounded by a load of freeloading bastards!”

“It’s always nice to do local festivals. It gives you a stage where you still have to prove yourself.”

“I have to say my boys are very good at equipping themselves in that situation. They’re an easy-going bunch and very professional. There’s no band politics. We’ve just got people who want to play music and have a good time. That’s what it’s all about.”

Before the train pulls in, Peter leaves us with a delightful little cliff-hanger: he’s working on some original material.

“So yeah, we’re back on it now – working on the new Monaco EP as we speak. It went down great last night, so I’m looking forward to recording some more now…”

Tickets are available via Cottoncloudsfestival.com.