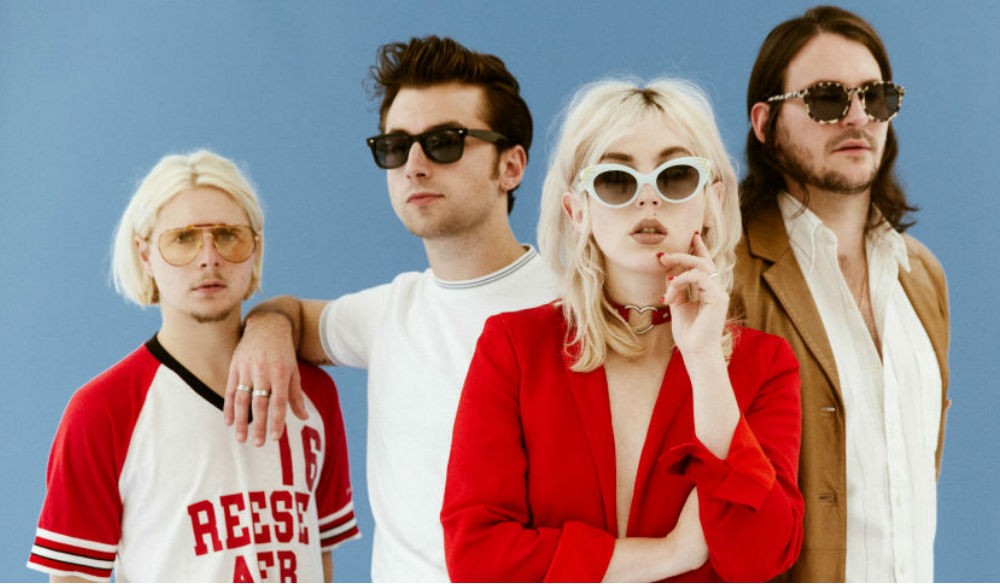 October; the month that the leaves start to fall, the heating goes on, the clocks go back, all hallows eve takes place and Black Honey embark on their latest UK tour, the first since the release of their self-titled debut album.

Black Honey are just as their name suggests; a sweet nectar that lures you in and once the sugar rush has died down their surprisingly shadowy narratives surface. As badass and beautiful front-woman Izzy B. Phillips puts it, BH’s music should be listened to “on full blast in the back of a pink Cadillac, crossing the border to Mexico.”

It’s the weird and wonderful mind of Phillip’s that is very much at the heart of ‘Black Honey’. As the creative force behind the album her lovable but villainous, Milky-Bar-kid-meets-Debbie Harry persona is the trademark the group have patented. As an open sufferer of both dyslexia and ADHD, Izzy is a huge advocate for self-expression without limit and has relied on her band – made up of drummer Tom Dewhurst, bassist Tom Taylor and guitarist Chris Ostler – to channel everything that comes from her obsessive and dizzyingly creative mind into their music.

Izzy explains, “I was writing journals because I suffered from really bad mental health issues as a young teenager and I was told that it would help with sleeping and coping with stuff. The journal evolved and got exciting, songs and poems kind of came out of it and it evolved into my music.”

After four years perfecting their craft on the DIY scene, the Brighton band have finally allowed us to delve into their honey-pot of a debut and the record acts as an ode to the scribblings in Izzy’s diary. Album opener ‘I Only Hurt The Ones I Love’ “summarises all of our naughty, mischievous, badly behaved, debauchery that we feel we’re all about”, while Izzy’s “favourite track” ‘Blue Romance’ “is a kind of a Palm Springs, romantic, fucked up love song.” Intrigued much?

Blending the likes of pop, shoegaze and disco, Black Honey’s album hit the shelves towards the end of September.

summarises fierce front-woman Izzy. “There’s some really mad stuff on it; we got a symphony orchestra on, guitar ballads and it’s up and down and changing just like my brain.”

Chaotic yet melodic Izzy’s music is a delightful symptom of her disposition. “If I had it [ADHD] or not I feel I’m a very creative person. I do know that my brain is wired differently to a normal person, I see things in a backwards way but in a way where it works for me. I wouldn’t change myself, I would go through all of the challenges I’ve had growing up again to have the mind that I have, as my mind is a powerful and very valuable asset.”

With a brain brimming full of ideas, Izzy and co have found it hard to shortlist their constantly evolving catalogue into a 12-strong album. “We could have put out a debut album like 4 times over now as we’ve got so many songs and I’ve just always thought I’ve got more to say.”

With the exception of three tracks – 2016’s ‘Hello, Today’, 2017’s ‘Dig’ and 2018’s ‘Bad Friends’ – the album is made up of entirely new music with nine brand new songs on offer. “I get really bored by bands putting out records with songs I already know and what I expected them to release when they haven’t offered any fundamental change or solution in their sound or ideas. I just felt like I had so much to give, so something kind of happened after the Royal Blood tour and I thought now is the right time.”

Self-released, it’s clear that BH doesn’t want to relinquish their creative control and are happy to go it alone, without the backing of a label. “We had a few offers but nothing was nowhere near as inspiring as doing it ourselves and licensing it to people who we have found to be super passionate.”

“it was more of a case that no one was passionate enough for it or for us. It didn’t feel like anyone had the astuteness, priority narrative that we wanted. There’s no way I’m going sign to a major label unless we are a priority artist because you are just going to fall down the track that most bands go down.”

From the wonderfully cinematic storytelling in their videos to their diverse range of merch, Black Honey do things their own way. “[I find the visual side of things] so easy, writing songs is really hard. Everyone is always like your art direction is really good and you make all these sick videos and I say – it’s writing the song that’s the hard bit.”

During a time of year when we’re all too happy to hibernate, it’s worth following the squalling guitars, vivid colours and cinematic vignettes on Black Honey’s “official biggest UK headline tour to date”.

“I won’t be giving a shit. I just want to lose it and let go. I just mainly want to be a weirdo on a stage that people can relate to. You can expect lots of songs from the new album, singing along, screaming, crowd surfing, badly behaved antics, drinking, partying and let’s all just get lost in ourselves.”

Catch Black Honey on the 21st October 2018 at Manchester Academy.