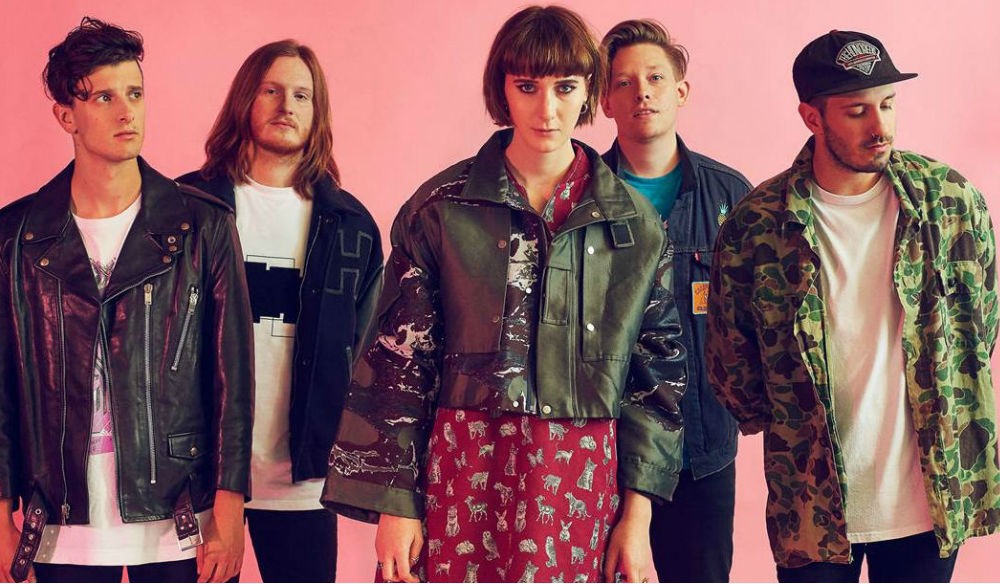 Fickle Friends on touring the UK & Europe without a label

Fickle Friends are a band that scream summer. From the palm tree cursor on their website to the Dirty Dancing-esque font of their logo, which evokes summers spent mastering the rumba with Patrick Swayze. Fun and cheeky singles like ‘Glue’ provide the backdrop to holiday romances, ‘Say No More’ should be added to your BBQ playlist, while ‘Swim’ is sure to perk you up and get you dancing on the final day of a festival. Even as we sit down with lead singer and indie-pop IT girl Natti Shiner to chat about the band’s journey so far, her newly bleached blonde bob conjures up images of sandy white beaches.

With hosepipe bans on the cards, sales of hand-held ice-creams up 24% on the previous year, and worries about a lettuce shortage, 2018 has surprised the nation with, at times, hotter temperatures than Athens, Istanbul and Rome. As the weather remains positively sweltering, things are also hotting up for Fickle Friends.

Having met at uni in Brighton, the band began their career in true DIY style by promoting their own shows and gaining a following on socials. Natti explains, “We did the whole Brighton circuit for a couple of years and then”

“things just kinda fell into place and the rest is history I suppose.”

“It was good because we had a booking agent quite early on and he was so great with us and doing our own tours was really cool. You don’t really think about yourself as being a promoter as such, you just feel like your putting shows on sale and hope you’ve made a few friends online. You’ve got to do all your social media stuff, which is now a part of the package and a part of the job.”

Finally, after two years touring the UK and Europe and performing at 53 festivals, all without a label, Fickle Friends had organically earned their stripes as well as a devoted fan base, and as such signed to Polydor Records.

“After [laughs] a lot of DIY we got a new Manager because we realised that we had a lot of trouble meeting the right people. Just because before we had more of a friend than a Manager, who didn’t have a lot of experience. So we changed management and it just happened really quite naturally.“

“We had meetings with a few labels who really liked us and they came and watched us play in a rehearsal room and then we decided on the Polydor deal.”

The group’s debut album ‘You Are Someone Else’ dropped in March 2018. Natti enthused,

“we just feel like a proper band now we have an album out, which is a bit weird.”

Featuring a throng of catchy singles, and a cover designed by Mat Maitland (the man behind the the ‘Disclosure face’), the record reached No. 9 in the UK Albums Chart, and No. 1 in the UK Album Cassette Chart. “It was a long time coming and it definitely succeeded my own expectations and I was over the moon and couldn’t quite believe it to be honest.”

Despite its killer tunes and timely electro-pop sensibilities, the themes behind the record go much deeper than the initial enjoyment they provide. With songs addressing social awkwardness, self-doubt, anxiety and the qualms of growing into young adulthood. The album perfectly expresses both the joy and uncertainty of growing up as a millennial.

explains Natti. “I think the album and the lyrics focus a lot on growing up as a millennial. Dealing with anxiety in a way that people can be quite vocal about now that people have a universal understanding of mental health and everyone has experienced it in one way or another, whether themselves or via someone else. So I touch on that quite a lot and I also focus on relationships and how I’ve been naive in them.”

“I’ve never started writing a song with any intentions because it seems silly to try and write a song if you don’t really know what it’s about or where it’s coming from.”

The band are hot stuff this summer, showcasing ‘You Are Someone Else’ out on the festival circuit with performances at Tramlines, Truck Festival, Reading & Leeds, Y Not Festival and 110 Above Festival over the coming months.

“It’s very exciting, you play to a mixed crowd; some of them are fans and some of them have just thought I’ll go and check them out. So you don’t know who the people are but it does feel like there’s a lot less pressure. You just rock up, compared to being on tour and waking up at 8am stressed in a city, doing load in, sound check and interviews, before the show has even happened. So festivals are a really nice time for us to have fun, get drunk and watch all the other bands.”

With 45 global festivals having signed up to a scheme, earlier this year, pledging that by 2022 they will have a 50/50 male to female artist line-up, the female-fronted Fickle Friends are flying the flag for gender equality in the music industry. Natti explains, “I just want to be a good role model but I’m quite vocal about equality because music is still a very male-dominated industry. You know, there are still now some issues with bookings and fees and things like that.”

“To me, I’m just in a band with my best mates and we see each other as equal but I suppose it’s cool and empowering to front a band of four boys.”

Expect palm trees aplenty when Fickle Friends’ take their debut on their biggest UK tour to date this October, culminating with a show at Manchester Academy.