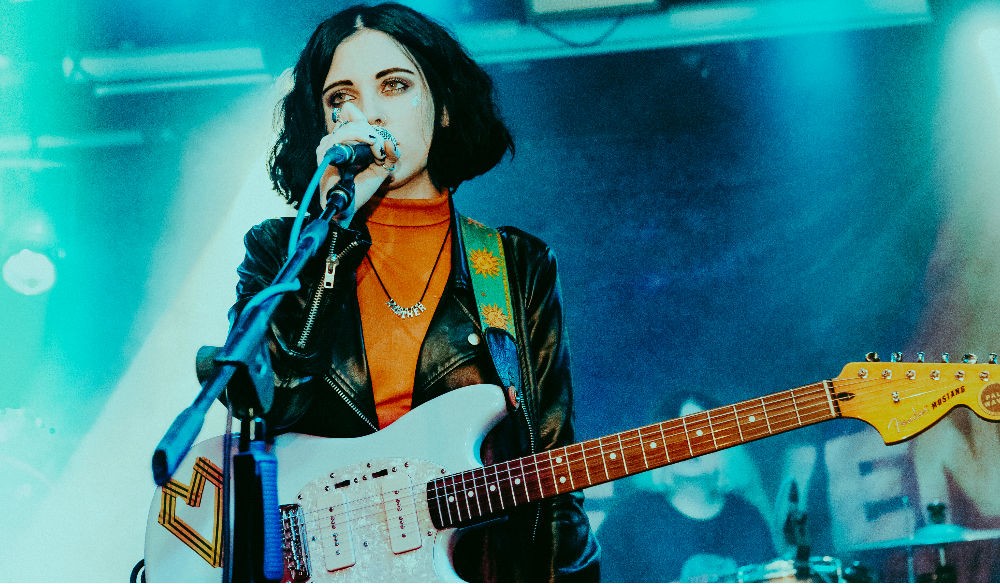 ‘My Mind Makes Noises’; a four-word phrase inked across Ciara Doran’s right arm, the lyrics from a line in the band’s song ‘Noises’. But now the four-word is more of a forward, an opener, a taster of what’s to come, and a phrase that is more than a lyric, more than a tattoo – it’s the title to Pale Waves’ upcoming debut album.

Since Pale Waves’ formation in 2014, and a brief spell under the name of Creek, leading lady Heather Baron-Gracie and her right-hand woman Ciara Doran have risen from relative obscurity to total obsession.

Adding kindred spirits Hugo Silvani and Charlie Wood to the Pale Waves fold, the band uploaded their first songs in 2015 and were since spotted by promoters SJM, which led to a slot on an XFM-sponsored showcase night, a flurry of radio play and a deal with Dirty Hit records. Finding a home with the likes of Wolf Alice and The 1975 and a friend in frontman Matty Healy, who’s since co-produced some of the band’s music and even directed the video for Top 5 hit ‘Television Romance’.

2018 kicked off with a Top 5 place in the BBC Sound of 2018 poll, securing a bounty of bookings on the summer festival circuit. Frontwoman Heather enthuses, “That was a big moment for us because it’s such an honour to just be suggested never mind be placed in the Top 5! So it was definitely a big, big moment for us and were very thankful for the opportunity.”

On the cusp of releasing their debut album, the former BIMM students are at a transformative time in their lives. Heather explains,

Fans were also screaming “where is the full album?” so I feel there’s a lot of people who are waiting and anticipating the album. I just want it to be what people hoped for and more.”

To coincide with the album release on the 14th September, the band will embark on a mammoth UK tour. Heather discloses, “You can expect new songs that we’ve never played before, we’re also going to throw in a few surprises but I can’t give it away just yet [laughs]. We’re just going to give it our all for our biggest shows to date.”

The run includes a date at our very own O2 Ritz. “Me and Ciara have been to so many shows there and both of us adore that venue and for us to be able to play it is just crazy. We’ve been there so many times as a punter watching other bands and I’ve always thought this is such an iconic and massive venue. I’ve imagined playing it one day and now it’s actually happening. I feel really, really excited.”

“So Manchester will definitely always, always have our hearts.”

In support of the album Heather and co, will sign copies and perform an intimate gig at HMV in the Arndale. “I’ve shopped there loads of times and it’s really exciting as we’ve seen lots of artists doing signings and the queues of people. I’ve always dreamt one day that that will hopefully be us and now we’re actually bloody doing it!”

Right now Pale Waves are making waves and Heather says the best part is that “You get to see the world with your best friends and it’s just everything we’ve ever wanted it to be and we’ve finally got it now.”

Personally we can’t wait to hear more from the minds that make noises. If you feel the same, grab your fishnets and creepers, and catch Pale Waves on the 28th September at the O2 Ritz.