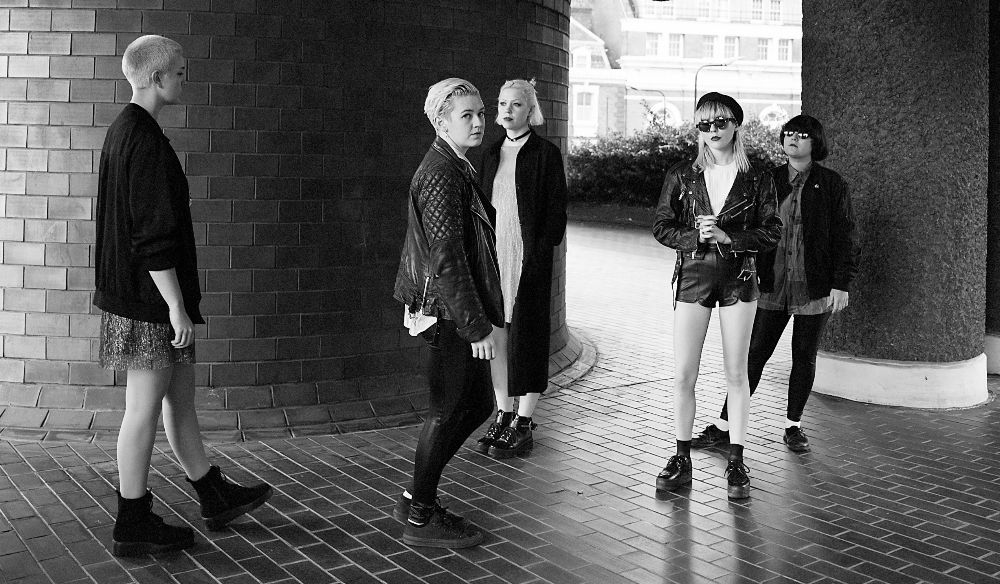 There seems to be a real stigma associated with the term, a stigma that all female five-some PINS are all too aware and keen to steer clear of. However, in recent years there has been a healthy flock of female groups – HAIM, Deap Vally, Honeyblood, Girlpool, Childbirth, Chastity Belt, and Upset – exonerating the term.

In 2011, perhaps subconsciously, PINS joined this new movement. Not wanting to be the token female in an all male group, lead singer and guitarist Faith Vern went on the hunt for a group of all girl bandmates. In true DIY style, the band set up their own record label – Haus of Pins – and released their debut album ‘Girls Like Us’ in 2013.

Sitting down with front-woman Faith, she talks about the dedication of her loyal group, made up of Anna Donigan, Lois Macdonald, Sophie Galpin, and Kyoko Swan. “I think the level of commitment from all of the band members makes the whole process so much easier. I’ve got so many friends in bands that can’t get a group together at one time, they’re always busy, have a job or something more important to do. The thing about being in PINS is that we all put everything into it.”

It is this fierce dedication that has since propelled PINS to release a second album ‘Wild Nights’ in 2015, alongside a series of EPs, including latest 2017 offering ‘Bad Things’. The determined quintet had only one man in mind to take the male vocal lead on single ‘Aggrophobe’ – the one and only punk rock stalwart Iggy Pop – and to even their own surprise the tenacious Manchester-based group managed to make this happen.

Faith reveals; “We were recording the EP in Scotland and one of the songs was ‘Aggrophobe’, which I wrote the music for and whilst I was living in Berlin my husband wrote the lyrics for it and we never did anything with them or had any plans for it until we got to Scotland and we decided to record it for the first time. It sounded really good and we wanted it to have a male vocal on it.”

“Then we were just sat around having a few drinks and all agreed that Iggy Pop would be the best voice on it and we decided to send an email somehow via a booking agent or some other way of getting an email address. So we just sent it and asked and he said yes and in a week or so he had the track and was recording the vocals and he sent it back to us and it was done.”

“It’s kind of funny when I think about it now,”

“That’s really just what happened, we asked him [Iggy Pop] and he said yes”

Garnering much-deserved radio support, the ‘Bad Things’ EP, available on a hand-numbered limited edition run of 500 on pink vinyl, also includes a cover of Joy Division’s ‘Dead Souls’, alongside ‘All Hail’, ‘In Nightmares’ and latest single ‘Serve The Rich’. “On the last single ‘Serve The Rich’ we had Jamie from The Kills in producing, he was our number one choice for that, so that was cool.”

“We went to London with Jamie and we had the studio for three days and we recorded three songs so the flip side to ‘Serve The Rich’ is ‘LUVU4LYF’, which was actually on our first debut EP and we reworked it and made it a little more in tune with ‘Serve The Rich’ and then there’s another song that no one has heard yet. I don’t know if there are any plans to release that at this point or not.”

“It’s good to get in a room with him and he did a lot of pre-production and sort of added that Kills touch, which we were all really excited about because at first, he didn’t even show us what he had done, he just left us to that track. Then he played the piece that he had been working on and we were like “oh my god that sound is exactly why we’ve got you here” and then we went on with his ways, he’s a very good producer.”

The band may cite themselves as simply ‘rock’ but there is a definite punk element to their offering. From their DIY label beginnings, to collaborations with Stooges frontman Iggy, touring with Riot Grrrl offshoot Sleater-Kinney, to shooting the video for ‘Save The Rich’ at an anti-conservative march. “We’ve had a few comments since saying that were trying to latch onto what’s popular as everyone is into politics right now and they are saying we are trying to do that right now and I really don’t care. That was the perfect video for that song, at that time, and we didn’t plan for it in that much advance.”

“We were going to do a music video of like dancers, glitter and lights in a studio but then we realised we were already going to the march and thought lets just take a camera and we got a guy that we know and he came down filmed us walking around and filmed some of the march and then we thought – that is the perfect video, that reflects what we are doing and where we are and what we stand for and our city as well, Manchester.”

Alongside recording and releasing, PINS have been active on the live scene throughout 2017, from slots at Reading & Leeds Festival and Festival No. 6, to support shows with Maximo Park, The Breeders and The Buzzcocks, alongside their own spring and autumn headline tours.

Discussing highlights of their most recent November headline tour, which included a date at the O2 Ritz, Faith said, “The end of it was really good as we played with The Moonlandingz and The Black Lips and I love both of them and then we went bowling with them afterwards at Dog Bowl across the way. So that was a really fun end to the tour, but aside from that, it felt really good to play new songs. We did a totally new set, about 90% of it was new material so it was really fun to play that and try the songs out and watch people react to them.”

Upon asking how performing in venues compares to festival appearances Faith adds,

“It was so good to play Reading & Leeds.

“It was nice to play on such a big stage but it’s always bittersweet with things like that because of course it’s a really great stage to play and there were loads of people but you have no sound check, barely a line check, thrown on the stage, thrown off the stage, so it’s a bit rough compared to other shows but we all had a good time and would love to play again next year and do a lot more festivals.”

Fast forward to 2018, and the band already have plans, “Yes, I really want to release a new album in 2018 but there’s things in the way. We’re going to start recording in January so if we can get it all done fast enough then I really hope it will be out, if not there will be some kind of music from us.”

When it comes to touring Faith adds, “We’re going to start off small, do some little shows and introduce the new material and see how it’s all going down and see how it works then later in the year do a headline tour.”

As a fierce, feminist, all vegetarian, DIY group with punk political undertones, PINS are bucking the trend of the traditional ‘Girl Band’. Unknowingly, alongside their fellow all-girl peers, they are expelling the phrase of its bad connotations. PINS may not want to be associated with the term ‘Girl Band’ but one thing is for sure, they are making the prospect of being in an all-girl group pretty damn appealing.

You may also like...
TagsExclusive, Faith Vern, Interview, PINS