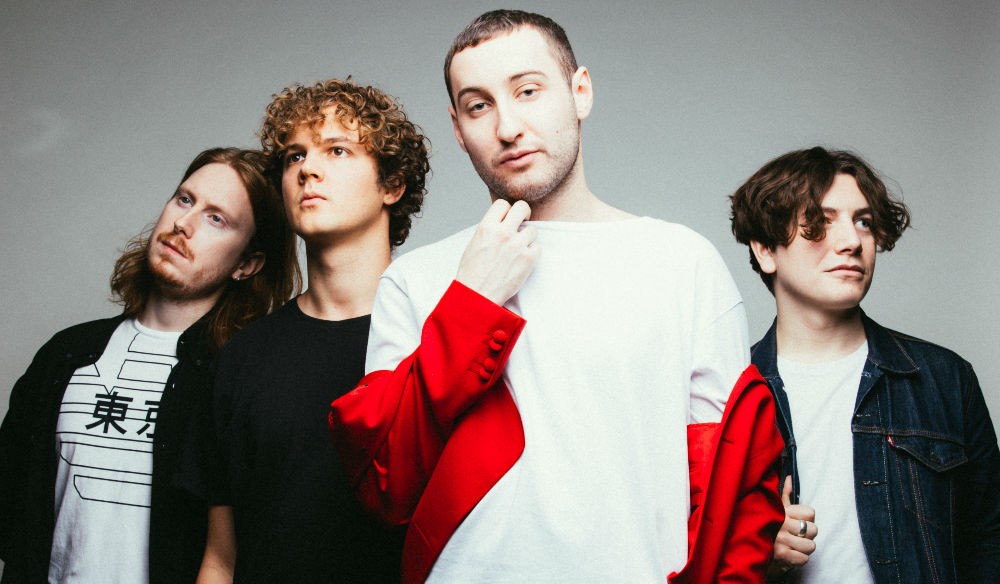 Sea Girls on their love for MCR and why their fans are “mad for it!”

Tonight is new territory for Sea Girls. They’ve taken an almighty leap and left landlocked London for a maiden voyage to the Netherlands. In just a few hours’ time, they’ll be on stage at Europe’s showcase music festival: Eurosonic.

The four musicians are a long way from home and it’s a big evening for such a young band. But they sound ready for it.

“We’ve done a lot of rehearsing and writing and we are working really hard to grow that into our best sound,” Sea Girls lead singer Henry Camamile tells The Live Guide. “Most importantly for us, it’s about getting new fans wherever we play a show. We give it our all and have as much fun as possible and hopefully, people really get into it.”

Drummer, Oli Khan, elaborates on their prep. “We’ve also looked back at our previous live shows to see how we can build on it to be better. This year, we’re doing everything we can to spread the word about Sea Girls.”

This late-night slot in Groningen’s Haus Maus is another big step in the band’s mission to get their homophone heard, as their trio of earwormy EPs (powered by passionate vocal performances and euphoric guitar twangs) continue to receive wide airplay back on home turf.

Pals since school, Sea Girls originally began playing across two separate groups. But as members of both bands found themselves flowing towards the Thames and a new life in London, they all joined at an estuary and decided to ride the waves of the gig scene together as an ensemble. It’s been wet and wild fun ever since.

Sea Girls are rapidly gaining a reputation for hosting gigs that leave punters wringing sweat from their shirts en route to the exit, but they’re also causing a splash among critics and tastemakers – listed as the sole band on BBC Music Sound Of 2019 list.

“It just felt so special when we realised we were the only band on that list,” Henry says. “It was awesome. When I saw all the great musicians on there it was a bit of a shock to be included alongside them.”

The vocal backing for Sea Girls from Radio 1 and Radio X has been deafening in recent months, and the band believe this kind of recognition has helped them get this far.

“It’s so, so cool having that kind of support,” remarks Henry. “We feel it gives us a mandate to do what we want to do. When you write something and it’s being pushed by all these amazing people it feels so incredible.”

“It’s just unreal,” exclaims Oli. “We’ve had our friends message us saying ‘I’ve just heard your track on the radio’ and I think”

Part of Sea Girls’ appeal is their fluidity. The band’s tracks are tough to pin down in any one genre, with Henry and Oli citing multiple artists as inspiration for their songwriting.

“We’re not inspired by any particular style of music. It’s hard for us to pinpoint our influences… but it always seems to be strong musicians,” says Henry. “I’d say The Killers and Bloc Party, but also solo artists like Amy Winehouse.”

“Our live shows are high energy from the start – singalongs and a lot of moshing. It’s often pretty wild and we just lose ourselves. We have a great time on stage and our aim is to make everyone in the room have just as much fun, I guess.”

Sea Girls will be bringing their slam-dancing shows to Manchester on at least two occasions this year, playing at Gorilla and the iconic Castlefield Bowl venue as support for The Kooks.

“I saw Arcade Fire at Castlefield Bowl a few years ago and that was one of the best gigs I’ve ever been to, so to say I’m looking forward to playing there is an understatement,” says Henry. “When I was there at the time I thought it would be amazing to play here. If we can create half as much energy as Arcade Fire did it will be a great gig, big time.”

“Manchester is one of our favourite cities to perform in”

“I used to have a girlfriend that lived there who I used to visit, so the city is very special to me.”

Manchester actually makes its way into the lyrics of one Sea Girls song that has already earned cult status among native fans – ‘All I Want To Hear You Say’.

“It’s one of our favourite singles and it always goes down a storm in Manchester,” says Oli. “People go mad for it! It’s a special feeling performing the track to fans who live in the city.”

The Live Guide also learn there’s a debut album coming… but the guys are keeping their cards close to their chest on this one for the time being.

“For the Gorilla show we’ll be bringing some new songs and playing them live for the first time,” adds Oli. “If we feel it works we’ll write it into the debut album.”

You can Catch Sea Girls in Manchester when they stop off at Gorilla, as part of their UK tour, on the 5th March 2019. Tickets are on sale now.