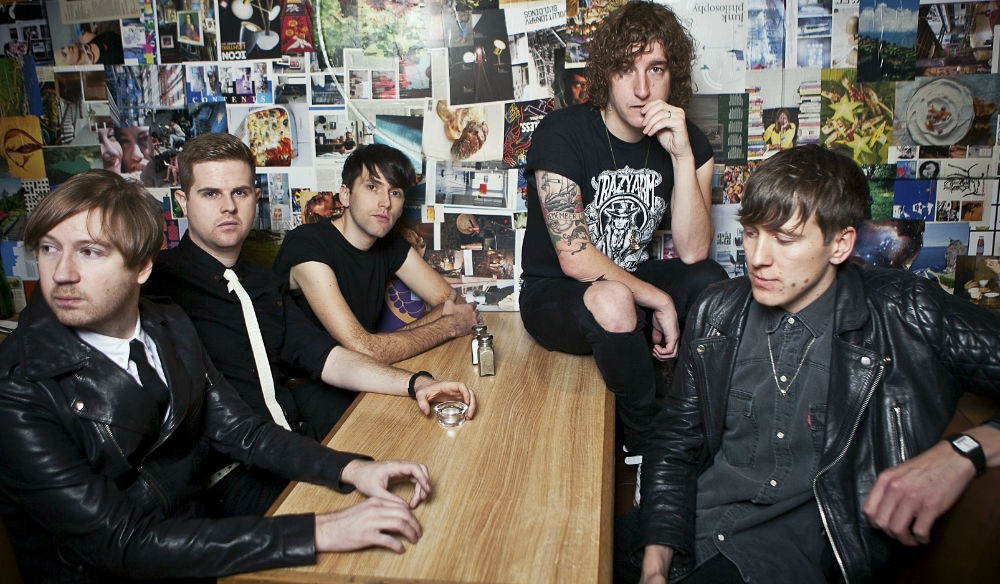 The Pigeon Detectives on sold out ‘Wait For Me’ anniversary tour

Let me take you back to 2007 – Rihanna’s ‘Umbrella’ is dominating the airways, Britney has shaved her head, new rave is all the rage, Skins has aired on the TV for the first time, contouring kits don’t exist, Emo’s are rife, the phone hacking scandal is all over the news, the smoking ban has just come in and The Pigeon Detectives have released their debut album ‘Wait For Me’.

10 years (and 4 albums) on and the band are celebrating the milestone by taking ‘Wait For Me’ out on a 15-date anniversary tour and rereleasing a limited run of the record in a shiny, plushy package on vinyl.

Ahead of the shows, we sit down with frontman Matt Bowman to reminisce about those days; breaking bones, performing on the roof of their van, taking shares in Dance To The Radio, and canoeing down student’s staircases.

“I remember not knowing what was to come,” reflects Matt. “So, we were making an album and it was fun but I don’t think we necessarily had a record deal so some of us were still holding down full-time jobs while trying to pop into the studio to do bits and bats. So it was a time of innocence really. You know? We were just doing what we did, there was no agenda and there was no kind of ‘end goal’, we just felt lucky enough that someone had given us some money to go record an album but there was nothing set in stone, just let’s see what it sounds like.”

“Yeah, it was a good time, it was fun.There was nothing else to consider, other than recording the songs we’d spent the last five years writing.”

The five-piece were in the place every new band wants to be, fighting off record contracts from major labels and plucky DIY labels.

“We were on a shoestring budget. We released the album on a DIY label – Dance To The Radio – and we didn’t receive an advance for that” considers Matt.

“and stuff from big labels but instead we took shares in Dance To The Radio and kind of saw the longer picture of being able to release future albums.”

Recorded at Soundworks Studios in their hometown of Leeds, ‘Wait For Me’ was released on the 28 May 2007 and entered the charts at No.3. Matt rants,

“Well in the first week I was pissed off, to be honest, I thought we should have had a No. 1 but then again Amy Winehouse was getting the hell out the charts, and Linkin Park had just released their first album in like 10 years. So I kind of felt a bit aggrieved but you know getting a No. 3 with a record that we weren’t even sure was ever gonna be released was pretty good.”

The album, which sold around 227,000 copies in 2007, went on to reach Platinum status in 2008, Matt adds: “I’d get monthly phone calls from our management and we got one saying it had gone Silver, and we were like ‘can we get a silver disk?’ and they said ‘whoa hang fire, it’s still got legs in it’, then they’d ring us saying it had gone Gold, and we’d say ‘can we get a gold disk?’ and they said ‘hang on a minute I think it’s got more to do’.”

“Then eventually, as soon as it’s gone Platinum you order your disks. That was a big thing for me, but I gave all mine away. I’m not really into keeping things like that but every time I go round to my Mum’s it’s on her wall.”

Recalling touring the album in the early days, Matt discloses, “So we toured the first album in the back of a van, and we were playing these kind of huge venues, compared to what we were used to playing, and still driving ourselves to gigs. But there’d be people who couldn’t get into shows, so we’d go outside and play acoustic sets for them, all stood on top of our van and it just felt quite organic.”

“The first time we went on tour it was a real party atmosphere, I mean I couldn’t do it at this age it would kill me [laughs], but at 19-20 when you don’t give much of a toss it was a really good time.”

The band found themselves heading to fan’s post-show house parties. Recalling one of those mad nights, Matt adds, “I remember once me and Oli went back to a student house party in Wales and we both ended up going down the stairs in a canoe and the guy was like ‘Yeah! This is fucking ace, Pigeon’s are going down my stairs in a fucking canoe!’ I woke up the next day thinking ‘Oh, did that happen?

“Is this my life now? I go down student’s stairs in a canoe?’”

The ‘I’m Not Sorry’ hit-makers will kick off their ‘album-versary’ run of shows in Manchester on the 19th October. Upon asking what the indie-rockers have planned for the shows, Matt contemplates, “Erm, d’you know we’ve thought long and hard about this and we’re gonna try and keep it simple.”

“We tried to think if I were to watch The Stokes play ‘This Is It’, I wouldn’t want too many bells and whistles. I would want the first song they played to be the first song on the album, I’d want to know what the next song coming was. We’re not playing the songs in the exact order, but the first four tracks are certainly what you’d hear if you put the album on, and I think the songs are gonna speak for themselves. You know, they’ve been around in people’s CD collections and then iPod collections, and now on Spotify over the last 10 years so we don’t need to do much trickery pokery.”

“Our fans really throw themselves at a gig and we’re just gonna get up there and play, do our thing.”

The Pigeon Detectives’ fans are pretty diehard. Matt concurs, “I love our fans but they’re fucking lunatics – let’s not mince our words! For a start, anyone turning up with song lyrics etched across their chest or their leg, that I wrote in my bedroom smoking weed and eating crisps is pretty
mental.”

“Yeah fans are weird but you know, they’ve bought me a house, they keep me from having to stand at a bus stop on a Monday morning waiting for the 443, so happy days!”

But it’s not just the fans that are ‘lunatics’, as the group are renowned for energetic, bone breaking sets, with Matt often scaling the lighting rigs and speakers side of stage.

Explaining that I had broken my arm at an early Pigeon’s show, Matt said, “Sorry about that dude!”.

Adding, “I’ve been black and blue, I’ve fractured my heel, snapped my hamstring, I’ve had stitches in my mouth, I’ve had my teeth repaired. I’ve got cuts on the back of my head which I’ve had stitched up. I mean it’s rare that I come out of a show without a bump or a bruise. More often than not – at least once a tour – I’ll need genuinely patching up.”

Perhaps inspired by these A&E experiences, the band released their second album ‘Emergency’ the following year in 2008. Now on album number five, ‘Broken Glances’, released in February, we asked Matt how their music has changed over the years. “It’s a real funny one that ’cause the music I listen to has not really changed, and the music I’m into has not really changed, but for some reason, the music we’ve stacked and make is really different to the music we were making at the start.”

“We could write another ‘Wait For Me’ in a heartbeat”

“we could do it in a day – because writing that kind of music comes easy to us, but would people want to hear it? I don’t think so. Would it undermine the first record by just being a carbon copy? Probably would. So yeah we’ve just tried to evolve and leave somewhere for us to go, and sometimes fans grumble a bit if you don’t write them another ‘I’m Not Sorry’ or ‘I Found Out’ but I think in the long run they’ll thank us for it ‘cause it’s something to stay interested in.”

Back in the present day, the band are at a bit of crossroad, considering splintering off into solo projects and pondering the thought of another album.

“We’ve not decided on anything in particular. We’re gonna do this ‘Wait For Me’ tour, there’s people pecking our heads to do a ‘Greatest Hits’ but I always feel like a ‘Greatest Hits’ is a band’s swan song you know? Where do you go from that? So, yeah I think we’ve got more music in us, there’s people in the band writing music all the time that might not necessarily be right for the band, so people might wanna go off and do little solo projects.”

“The Pigeon Detectives will always be a work in progress, we’ll never call it a day, people can go away, come back, we can ignore each other for 10 years and get together and milk ‘Wait For Me’ for the 20 year anniversary. This band belongs to everybody that’s in it, so it’ll always be a vessel for making music, releasing music, touring music, but who knows what we’re gonna do next.”

Matt and co. may be unsure what’s next for the band, but one thing is for sure their dedicated fans will be watching with eager eyes.

Join them and transport yourself back to 2007 at The Pigeon Detectives’ show at Manchester Academy on the 19th October.

You may also like...
TagsInterview, Matt Bowman, The Pigeon Detectives