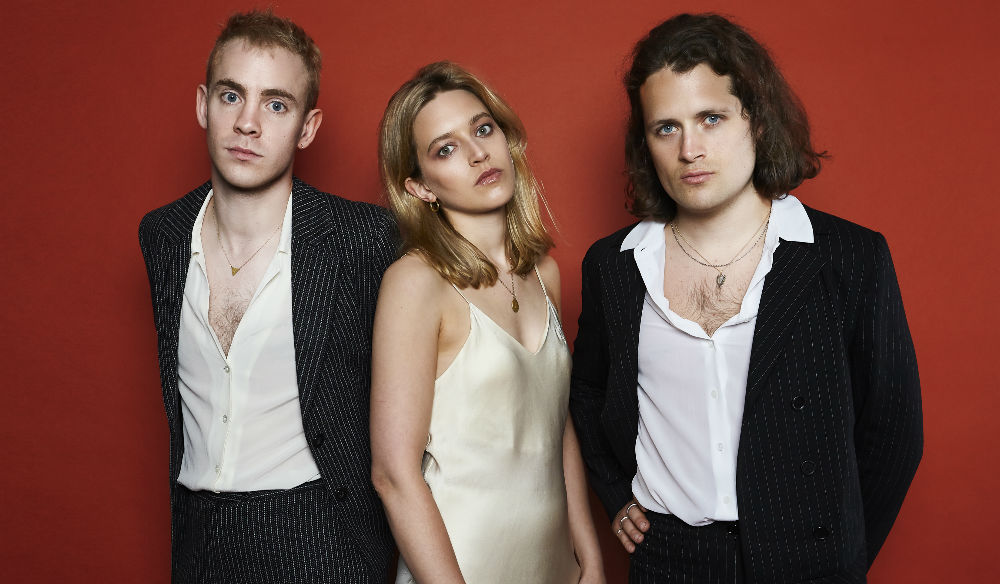 Whenyoung on signing to Virgin EMI

Gardening for Carl Barat, performing at Shane MacGowan’s 60th birthday party, rubbing shoulders with the likes of Sinéad O’Connor, supporting Patti Smith and gleaning advice from non-other than Bono; whenyoung are a band in good company.

Aoife, Niall and Andrew met in their hometown of Limerick, Ireland where the trio’s friendship evolved during vodka-fuelled, late nights and over a mutual love of The Velvet Underground, The Strokes and The Ramones.

“We were all teenagers going to indie gigs that were going on in the venues in Limerick,” explains frontwoman Aoife. “We all bonded over the same type of music. Where we are from dance music is more popular, so finding people who liked guitar bands was rare.”

“We actually formed the band in London, even though we had all known each other and loved music together in Ireland.”

“When we all moved to London setting up a band was just something to do.”

“We really like living in the UK as we’ve had a lot of opportunities to play a million gigs and develop. Maybe we wouldn’t have had that opportunity in Limerick as I guess there are less venues and a lot less people [laughs].”

Following a string of intriguing singles, the band released their EP ‘Given Up’ on the 9th November, which is pressed on 10’’ blue vinyl.

Containing 4 solid tracks, the EP shows the real musical breadth of the band.
The title track boasts bright chime-like guitars and thundering drums, ‘Heaven On Earth’ is strangely befitting of a Belle & Sebastian number, as a nod to their fellow Limerick-ians a charming cover of The Cranberries ‘Dreams’ also features and the surprisingly melancholic ‘Sleeper’ rounds things off.

Aoife explains, “We chose to cover The Cranberries ‘Dreams’ as they are from the same city as us in Ireland.”

“As Limerick is such a small place, they are our local heroes and when their vocalist Dolores died earlier this year – even though I’d never met her – it was a very sad moment and our city went into mourning. It felt like it would be a nice tribute to cover the song on our EP.”

With ‘Given Up’ out in the ether we’re bloody glad the trio haven’t ‘Given Up’ and are currently in the studio penning their debut album. “It’s like day three in in the studio now and all I can say is there are lots of drums.”

“You can hopefully hear the debut early spring.”

“I’m really hoping by March / April next year – that’s what we are aiming for. We’re just really excited to get it out.”

To date, whenyoung have supported Patti Smith, Dream Wife, Declan McKenna, The Vaccines, and Peace and will be warming up Blossoms fans on their upcoming UK tour. “We’re nervous but also really excited. I can’t wait to see their shows as I’ve never seen them perform before and I’m sure their audiences will be amazing. It will be nice to support such established musicians; it’ll be a great experience.”

Blossoms too signed to Virgin back in 2015, and just as Blossoms have bloomed from the pub of the same name in their hometown of Stockport to their upcoming headline show at the newly rebranded O2 Victoria Warehouse, whenyoung are poised to succeed under Virgin’s wings.

“The label are really into our message and style of music and it feels like a really good match.”

“Until last December we were all working in London; Niall was in a bookshop, Andrew was managing a restaurant and I was working as a gardener. It was handy as we all had perks; we could get free food, get free books and I could trim a bush [laughs] but no joking aside it’s much better now we can just concentrate on our music full time.”

Sharing a label with the likes of Bieber, Black Sabbath, Katy Perry, and Elton John is no mean feat.

“but it really doesn’t feel real. We’re still the babies on the roster so we still have to prove ourselves and work really hard.”

“It’s an amazing opportunity and we feel so privileged to now dedicate all of our time to music and record an album.“

It’s often said that succeeding in the industry is as much about what you know as who you know, so when The Pogues’ frontman Shane MacGowan asked whenyoung to perform at his 60th birthday party, the group jumped at the chance.

“It was incredible. There was a range of amazing musicians; I rubbed shoulders with Sinéad O’Connor, Shane MacGowan, Bobby Gillespie from Primal Scream and God – Johnny Depp was there – it was insane to be in the same room as them all.”

“It was really moving listening to them perform. They are really amazing artists and it was a privilege to be on the same stage as them and to hear all The Pogues songs live, which are just absolute bangers.”

At the event, Aoife even got chatting to Ireland’s most-loved villain. “I ended up talking with Bono for a few minutes, I have no idea how I started talking to him but I just did [laughs]. He was talking about the show and I told him I was really nervous, and he said that feeling never really goes away and you just have to concentrate on the music and that’s the most important thing.”

“He seemed like a really nice guy and not what I expected as we all think he’s a different person than he probably is.”

Whenyoung certainly seem to be moving in the right circles, and as a band with a lot more than just youth on their side, they are destined for good things.

Catch whenyoung supporting Blossoms at the O2 Victoria Warehouse on the 8th and 9th December 2018.